Life stress. It’s an important factor in racing performance that is often overlooked. Since December I have been working on my application for physiotherapy school which included having to retake a course because mine didn’t “count.” After a few stressful weeks in December emailing and calling multiple schools trying to find the correct course I ended up with my back up option of taking one through athabasca, twice as long, twice as much. This meant that now I got to spend my spring cramming a full  year course into 5 months. Well this week I realized I was supposed to have it done for end of April… and I will have it done end of May. Oops. Big oversight. Whether this will be a factor, I will know by May 18th. Until then, this meant all of last week and the next 3 weeks will be spent cramming trying to finish my course work so I can book my final test to show I have completed the course.

Now leading into this race I have been switching my training over to speed work vs. my ATB training that was the earlier spring training block. It’s been pretty exciting to see myself actually run fast. I knew that I was going to be stressed so I did as best I could to manage it. Extra sleep – to recover from the mental grind of studying after working all day, meditation, and I floated on Friday to  help clear my head. With my training this season, I thought that on the right day I could run a pb (current 35:40 last September after I returned from Flagstaff). So I went out to the race with about 3:30ish pace in my head and stuck with that plan.

Mothernature however, had other plans. Before the race start, it was pouring rain. It let up for about 5 minutes then we headed off. We weren’t even 2km into the race when it came back and the skies just opened on us. I was chasing another female hoping to take the win today and maybe snag a pb with the added pressure of chasing someone. I think if I had been mentally fresher I could have done it, but with the extra stress this week I was happy to just push hard and stay focused during the race. The course also became one giant puddle as we winded through the bike paths by the waterfront. In the end, I tied my exact time from last year’s Mississauga of 36:19.0 which at that time was a 45sec pb and came 2nd overall. 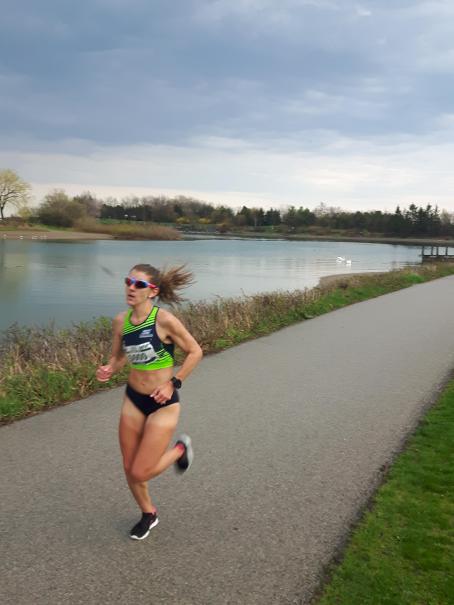 So, all in all, I can’t be disappointed. It was a giant breakthrough year last year and if I don’t quite match those pb’s, I’m still light years ahead of where I was in 2016. It also shows you to try to pay attention to your life stress and manage as best as you can. I think I did a much better job of that this time around vs. Chilly Half this year where I had an exam the following week and the studying just ruined that race for me. At least if I do get my course completed end of May, I can spend my summer relaxing and enjoying racing.

Follow me this weekend to see me debut in a new event distance! Any guesses?

Until then, GRIND ON.